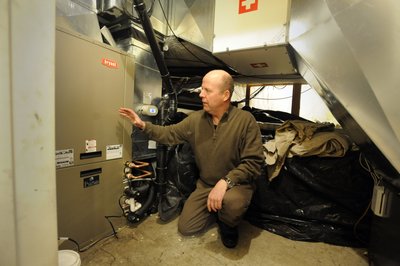 In part, John Adrain bought his house in northwest Spokane for the great views of forests and peaks.

But those views came at a premium. In the winter, the windows in his two-level home accounted for 80 percent of heat loss. The 3,100-square-foot house, built in the 1990s, primarily relied on two oil furnaces for heat.

Adrain said that during some cold spells he easily spent more than $1,000 per month on heating.

An inventor and entrepreneur, Adrain did some research and decided to install an underground geothermal heating and cooling system.

“It’s great to go out and invest in solar heating. But, for me, the first step was to reduce the amount of energy I’m using,” he said.

After three months of work, Adrain recently watched as workers hauled the oil furnaces to the dump. His home now hums along on a new geothermal system that also provides him a 30 percent tax credit on the cost of installation, including the hefty price for drilling the eight wells.

As oil and gas prices trend upward, some homeowners are looking at the option of geothermal energy to heat and cool their houses. But even with a 30 percent federal tax credit, local companies haven’t seen the demand increase in the past year.

Northwest Geothermal, the Hayden contractor hired by Adrain, does about one geothermal installation a month, owner Jason Bartel said.

Spokane-based Holliday Heating & Air Conditioning, a company that’s been installing geothermal systems for about 15 years, also does about one system per month.

The main effect of the tax credit has been an increase in the number of local companies offering to install geothermal systems, said John Munro, main sales representative for Holliday Heating.